skip to main | skip to sidebar

Three days since the last update... As far as I'm aware, I spent all of Thursday and Friday asleep. Unless, that is, I'm being hit by Slender Man's infamous memory loss. Or worse, perhaps TheArsonist is taking over again...

Anyways, whatever. I've gone through all five boxes of stuff and have found nearly nothing. No Operator symbols, no allusions to a business man hanging around, no childhood friends disappearing - nothing.

My old writings up until I turned ten are about as lucid and make as much sense as any child's works. Lots of stories involving myself, Emily, and Ted on adventures around the forest outside my house, running away from giant spiders and masked villains. A few about evil wizards being fought off by Batman and the Power Rangers. Ya know, childhood fantasy.

After ten, a lot of the writing dries up. There's the occasional disturbing page of how I felt after my mother killed my father, like the one explaining she must have had a spider in her brain that took control of her and made her do it... Not much there either.

Finally, the drawings. There's the Spider one I already posted, which was strange but not enough to ring any massive bells. I was about to give up on everything, when I found this drawing. Something about it does NOT feel right to me. I've been trying to explain it away as an illustration from one of my stories, but it... it just feels wrong. I get nauseous just looking at it. It's not Slender Man. It's just... weird. 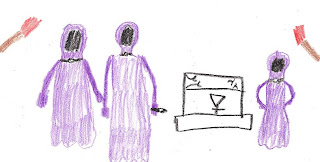 Damien
I'm an arrogant bastard of a nerd, and I have a bad habit of thinking I'm always right. I obsess over stupid things. Greatly appreciate intelligent thought. Overimaginitive... Self-loathing.