skip to main | skip to sidebar

I just woke up to find two old, childhood drawings tucked beneath my pillow. One, I had written off as totally unrelated to anything. The other... too personal to post. Apparently, TheArsonist thinks otherwise.

On the back of each drawing were two words, and a signature from my alter ego. Seems like I'm, once again, doing something wrong, and he feels like he needs to step in to get me going... 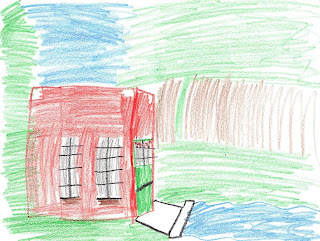 I recognize this place. It's an old building in the forest/park behind my old house. Emily, Ted, and I always used to play near it, usually something to do with space cops or magic knights. I don't actually remember what was inside, since the front door was always locked. Not a huge building, but it was a landmark back when I was younger. 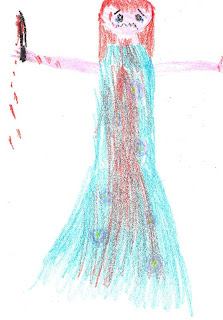 I didn't want to post this... I remember I drew this while in psychological counseling after my father's murder. I guess it's how I viewed my mother then; how I still view her today. "Orestes" isn't quite as straightforward in telling me what I'm supposed to be choosing as "Return". Perhaps this is TheArsonist telling me to go question mother...?

So, I now have a choice: an old building in the woods, or a mad parent in an asylum. I don't particularly like either option, but TheArsonist thinks I should do this. I'd like an outside opinion on this. My gut instinct is to "return" to the building, but that's likely just me wanting to avoid mother. Your thoughts would be appreciated...
Posted by Damien at 9:08 PM

Damien
I'm an arrogant bastard of a nerd, and I have a bad habit of thinking I'm always right. I obsess over stupid things. Greatly appreciate intelligent thought. Overimaginitive... Self-loathing.